The Awards were established in 2014 to acknowledge the achievement of individuals and organisations that have made a significant contribution to the Australian coastal environment, settlements and sustainability. They are intended to raise community awareness of the importance of the coastal zone and to encourage coastal planning and management practitioners to strive for excellence.

Barry Sammels, Chair of the National Sea Change Taskforce, said the standard of nominations for the 2015 Australian Coastal Awards was particularly high. “Many of the people who took part in the projects that received awards are not well known public figures,” he said. “They are community volunteers, council officers, researchers and others who are working on these projects behind the scenes, out of public sight. But the work they are doing is vital.”

The Award in this category is made to the Peron Naturaliste Partnership for its integrated and strategic approach to the management and implementation of coastal adaptation in the region from Cape Peron to Cape Naturaliste in the southwest of Western Australia. The partnership represents a collaboration between nine coastal councils in the region and in the view of the judges is an exemplar for how adaptation could be addressed in other Australian coastal regions. The judges noted the partnership was established for the specific purpose of addressing climate change adaptation and that it assists participating councils in implementing effective responses to climate risks including sea level rise, coastal erosion, inundation, fires, extreme heat and loss of biodiversity.

Highly commended – Eurobodalla Shire Council, Shoalhaven City Council and Whitehead & Associates Environmental Consultants were highly commended for their entry – South Coast Regional Sea Level Rise Policy and Planning Framework. This commendation acknowledges the initiative of the two councils and their environmental consultant in developing a flexible and adaptive policy response to sea level rise following a decision by the State Government to withdraw existing sea level rise policy in September 2012. The innovative approach adopted by the project partners to deal with the withdrawal of state government guidance on this issue was considered noteworthy by the judges and is being considered for adoption by several other NSW coastal councils.

The Award in this category is jointly awarded to the Griffith Centre for Coastal Management for its Coastal Community Engagement Program and to Coastcare Victoria for its Coastcare Victoria Program. The judges noted that these two programs represent significant, on-going initiatives that are broad in scope and have involved engagement with communities at an extensive scale.

The other joint award recipient is Coastcare Victoria for its Coastcare Victoria Program, which is now in its 21st year. The program was initiated to provide support to volunteers and community groups involved in coastal management, protection and conservation activities. It was the first State government program set up to support coastal volunteers and was adopted nationally in 1995. There are currently some 20,000 people participating in the program who are supported by four Coastcare facilitators and a State coordinator.

Highly commended – the Nyangumarta Warrarn Aboriginal Corporation and Yamatji Marlpa Aboriginal Corporation were highly commended for their entry Nyangumarta Warrarn Indigenous Protected Area Planning – Eighty Mile Beach. In a process that commenced five years ago, the Aboriginal Corporations consulted extensively with the traditional owners of an area of land including 110 kms of coastline, stretching between Broome and Port Hedland in north-west Western Australia. This process has resulted in a plan to manage and protect the Eighty Mile Beach, which is recognised under the Ramsar Convention as one of the most important habitats for migratory birds in the Asian-Australasian flyway. The plan is aimed at addressing key threats, such as unregulated access to sites of cultural significance, and visitor impact on the landscape, plants and animals within the Nyangumarta country, including water bird and flatback turtle nesting sites. An important part of the project is to collect the Nyangumarta people’s knowledge of the local environment so that the knowledge can be used to manage and care for the areas and be passed down to future generations. 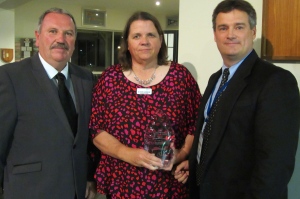 Dr Ros Jessop and Matthew Jackson (right) of Phillip Island Nature Parks, received the Australian Coastal Award for Planning and Management for the entry Saving Summerland: A Peninsula for the Penguins.

The award in this category is made to Phillip Island Nature Parks for the entry – Saving Summerland: A Peninsula For The Penguins. In the view of the judges this project, now in its 30th year, has achieved its objective of saving the last remaining colony of penguins on the Phillip Island coastline. In the 1980s, penguins on the Summerland Peninsula were facing extinction as a result of development pressures, loss of habitat, predation by dogs and foxes and weed infestation. The project set out to address these issues through a combination of long-term monitoring, an extensive buy-back program of residential housing and allotments, conservation of an entire coastal landscape and effective predator control. Penguin population in the colony is now estimated at 32,000 adult birds, the Summerland Housing Estate has been relocated, the habitat has been restored, and there have been no recorded deaths caused by foxes for more than five years. 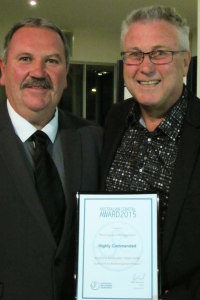 Highly commended – Augusta Margaret River Shire, in Western Australia, for its entry titled Surfers Point Redevelopment Project. This project represents a significant coastal infrastructure project in the south west region of Western Australia which has produced what the Association of Surfing Professionals has called ‘the best ampitheatre for surfing in the world’. The Surfers Point Precinct Redevelopment was identified as a priority project in the Margaret River Growth Plan and Economic Development Plan. It was developed in conjunction with the organisers of a pro surfing event to increase capacity to stage major state, national and international surfing events, and to provide improved foreshore infrastructure and enhanced protection of natural habitats. The completion of the project is estimated to have contributed to a 33% increase in visitors from outside the region.

Peta Leahy, of the Griffith Centre for Coastal Management, was presented with the Australian Coastal Award for Research.

The Award in this category is made to the Griffith Centre for Coastal Management for its role in providing advice on the application of science to coastal management in Queensland. Since commencing operations in 1999, the Centre has produced 170 coastal research reports, 165 research partnerships, and 250 peer-reviewed publications. In particular, the judges have noted the significance of the QSurge hazard-forecasting tool, which was developed by the centre to enable emergency management officers to assess the storm tide risk hazard during a cyclone event. The challenge for councils in responding to cyclones is to make a decision as early as possible about whether a settlement needs to be evacuated. In the past this decision often had to be made before estimates of storm tide inundation became available. The QSurge tool utilizes high-performance computing technology to provide council disaster managers with storm tide inundation at a much earlier phase of the cyclone’s track towards the coast. The tool is of state-wide relevance and has the potential to be of national and international significance.

This three-year study which was led by CSIRO in partnership with Earthwatch was the largest survey of marine debris ever undertaken. It has been highly successful in raising community awareness of the need for increased efforts to tackle the threat of marine debris to native wildlife and to marine, coastal and estuarine ecosystems. The survey involved sampling 35,000kms of coastline at 100km intervals. The results of the survey were combined with ocean modelling and wildlife distribution patterns to map the density and distribution of marine rubbish and identify major threats to native wildlife associated with debris. This innovative national partnership has involved the participation of thousands of ‘citizen scientists’, including students and their teachers.